skip to main | skip to sidebar

a country mouse goes to York

We're just back from enjoying the hospitality of my brother and his family in Hull for the October week. Little R and I went off on a day trip to York to celebrate my 41st birthday. We had to visit Betty's, of course. Little R had hot chocolate and a butter bear biscuit and I had a fat rascal (a Betty's speciality) and a big silver pot of coffee. We know how to look after ourselves when we travel. 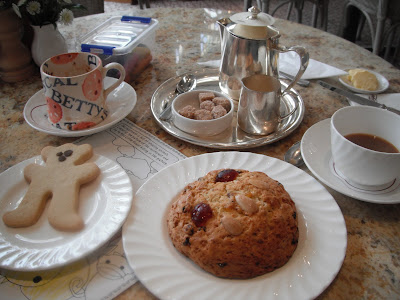 York is one of my favourite cities. In a previous job I went on several week-long building conservation training courses at King's Manor, below. Although it's a university building the public can use the cafeteria so I was able to bring Little R in to explore the courtyards. When I was on the courses (one per year: stone, timber and lead) we were given access to some truly amazing parts of medieval York, such as closed parts of the Minster, its stoneyards where the modern masons work and parts of Barley Hall that were being uncovered for the first time in hundreds of years. Now Barley Hall is a tourist attraction with lots of interactive stuff but when I was there it was a darkened time capsule, full of the dust and filth of the newly revealed ancient lath and plaster. I did realise though that I might have been overdoing the building talk with Little R when she casually ran her hand over an ashlar wall and commented, "Dressed stone." She's 5. I told my sister in law about this and she asked Little R what dressed stone meant. I was such a proud mummy when she gave a comprehensive explanation! 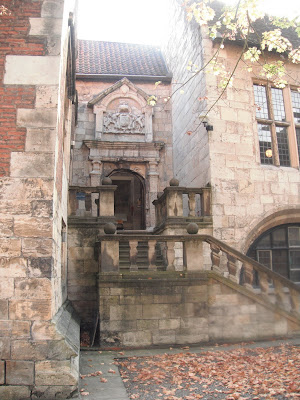 Before we left for Hull my good friend Anne gave me a really special present: 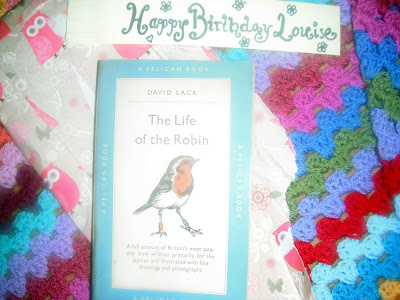 What a beautiful little book. She knows I love robins. It was published in 1953. So special to think that it has lasted all this time. I am really looking forward to reading it and using the handmade bookmark.

And have you noticed the background? Yes, it's the Attic 24 granny stripe blanket, finished at long last. I will try to get a photo of it spread out properly on a sunny day. It's 240 stitches wide and 110 rows long. Each row took me about 20 minutes to crochet (they were trebles) so that blooming blanket represents a sizeable chunk of my time. It is probably not a good idea to total it up. I do love it though and life's not all about efficiency after all. 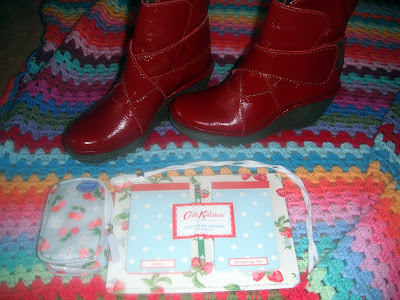 I bought these red patent boots (Fly London) using birthday money from kind Granny Mouse. I have been wearing them all day and they are as soft as slippers plus they give me a much needed bit of extra height. I had bought a pair of browny/purpley patent ones in John Lewis and when I got home I checked Amazon and found the exact same ones in red for exactly half the price so needless to say I'll be returning the brown ones.

I also bought just one or two tiny things in the Cath Kidston shop in York. I was very restrained considering the level of happiness these purchases brought me. I bought a gadget case for my new camera and a magnetic memo board to display (certainly never actually use) on my fridge. I also bought a Cath Kidston bag for Little R. She carries it and I have the enjoyment of looking at her wearing it. 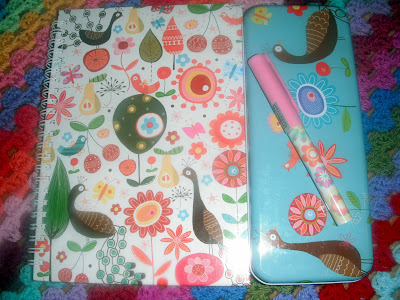 At last I have got round to posting a photo of the bloggy giveaway I won a few weeks ago from Andamento. I had taken photos of it at the time but had used my old camera which then got broken with the photos inside it. The giveaway was a notebook, pen, cute birdie post-its which I have already used all of, and a pencil tin. The pencil tin was packed full of the most delicious home made tablet - soft and fudgy, mmmm. I received another parcel recently from a fellow blogger, this time from Vintage Squirrel (below). I had used some more birthday money to buy one of her beautiful brooches. 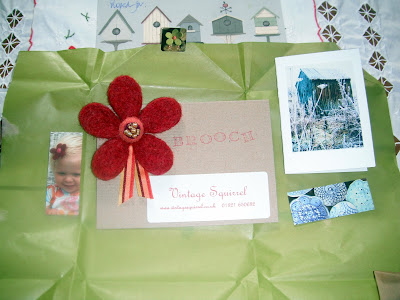 Katie felts the wool by hand and she sent me some samples of wool colours and ribbons so I could choose exactly what I wanted. I'm really delighted with it. I won't be missed wearing this and my red patent boots. I've run out of birthday money now so it's back to frugality. I noticed a postcard in a book shop in Edinburgh last week which I was too cheap to buy. It was a 1940s style photo of an elegant woman's face smiling benignly with the caption, "Frugal is such an ugly word."
Posted by rockinloubylou at 06:55 22 comments:

a country mouse goes to Edinburgh 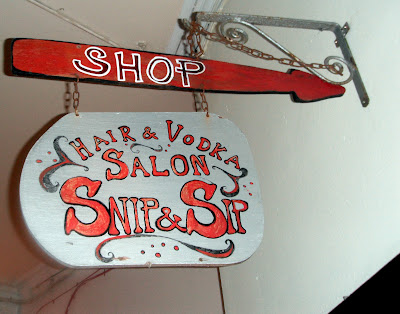 Another year, another birthday, another trip to Edinburgh!!!! Lynn and I had a great day out. It's a real adventure for me these days to go somewhere like Edinburgh and it's an odd experience for both of us to walk at an adult pace without stopping every few steps to be shown sticks and stones and getting our pockets stuffed with conkers and worse. We had lunch in a very strange little place, Forest Cafe, with a hairdresser next door called Snip and Sip (sip vodka, that is). We resisted the temptation for a quick shampoo and set and headed off down Victoria Street instead. Quite a dark photo, but it is quite a dark little street and the nights are fair drawin' in. 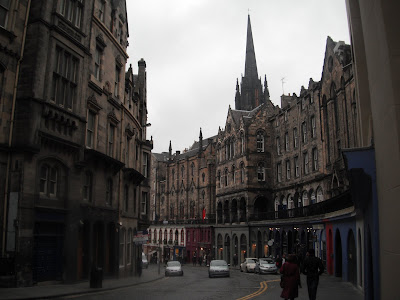 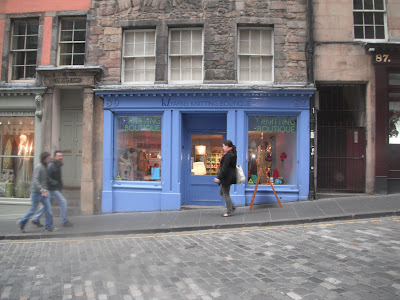 And what should we come upon, half way down this picturesque street, but K1 Knitting Yarns, a beautiful little knitting shop. I took this photo in landscape and rotated it in Picasa to portrait, hence the Diagon Alley quality which does actually suit Victoria Street. I was all set to go in but had to remind myself that my budget did not permit a wool spree, and certainly not at tourist prices rather than charity shop prices, so I reluctantly walked on after pressing my nose to the glass like a starving Victorian orphan at a baker's shop. We both had to be home for a reasonable hour (we're old) so after packing Lynn off back to the farm I wandered down to the train station to catch the six thirty back to Glasgow Queen Street. I've had several very special birthday presents already so my next post will be a big thank you to my kind, thoughtful and generous friends. Goodbye Edinburgh; see you again next year. 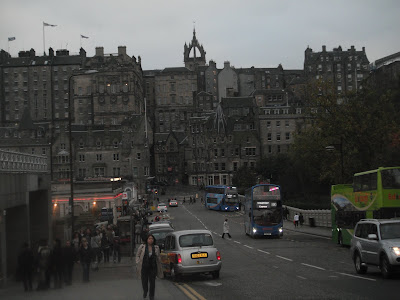 Posted by rockinloubylou at 02:07 5 comments:

rockinloubylou
Hi, I'm Louise. I am a stay at home mum and I love it, but the world of work is looming and I need to find ways of being organised to facilitate my return to being a town mouse. This blog will record my struggles, any successes there may be and some of the general joyous little moments of country mouse life along the way.